Journal of the American College of Cardiology
23 days ago

Dietary Inflammatory Potential and Risk of Cardiovascular Disease Among Men and Women in the U.S. 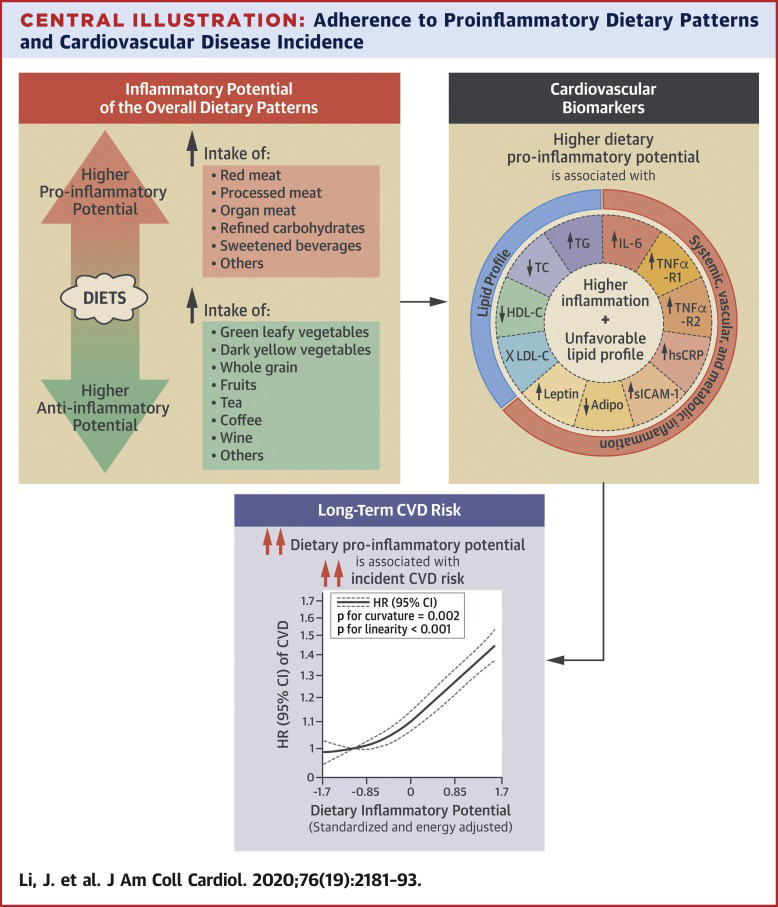 This study sought to examine whether proinflammatory diets are associated with increased CVD risk.

We prospectively followed 74,578 women from the Nurses' Health Study (NHS) (1984–2016), 91,656 women from the NHSII (1991–2015), and 43,911 men from the Health Professionals Follow-up Study (1986–2016) who were free of CVD and cancer at baseline. Diet was assessed by food frequency questionnaires every 4 years. The inflammatory potential of diet was evaluated using a food-based empirical dietary inflammatory pattern (EDIP) score that was pre-defined based on levels of 3 systemic inflammatory biomarkers.

During 5,291,518 person-years of follow-up, we documented 15,837 incident CVD cases, including 9,794 coronary heart disease (CHD) cases and 6,174 strokes. In pooled analyses of the 3 cohorts, after adjustment for use of anti-inflammatory medications and CVD risk factors including body mass index, a higher dietary inflammatory potential, as indicated by higher EDIP scores, was associated with an increased risk of CVD (hazard ratio [HR] comparing the highest to lowest quintiles: 1.38; 95% confidence interval [CI]: 1.31 to 1.46; p for trend <0.001), CHD (HR: 1.46; 95% CI: 1.36 to 1.56; p for trend <0.001), and stroke (HR: 1.28; 95% CI: 1.17- to 1.39; p for trend <0.001). These associations were consistent across cohorts and between sexes, and they remained significant after further adjustment for other dietary quality indices. In a subset of study participants (n = 33,719), a higher EDIP was associated with a higher circulating profile of proinflammatory biomarkers, lower levels of adiponectin, and an unfavorable blood lipid profile (p < 0.001).

Association Between Healthy Eating Patterns and Risk of Cardiovascular Disease

Researcher is an app designed by academics, for academics. Create a personalised feed in two minutes.
Choose from over 15,000 academics journals covering ten research areas then let Researcher deliver you papers tailored to your interests each day.